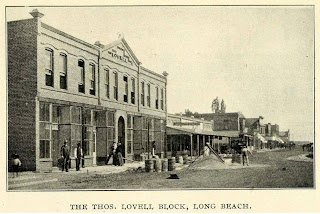 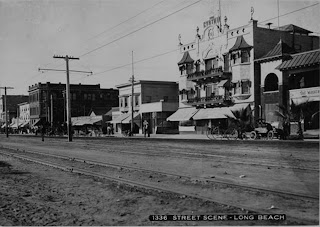 Early streets in Long Beach were dirt. Dirt that was watered down and sprinkled with straw. It still created mud which caked the bottom of women's skirts and the boots of men. Taxpayers were assessed both for the water and the straw as part of the city's maintenance program. These photographs show the "downtown" area of Long Beach at the turn of the century.

The paving of city streets took many years to happen.

Asphalt was not manufactured from oil by products until 1910 so it took some time to see the streets paved with that material. With the growth of automobile use, asphalt was used more and more to make a smoother ride.

Trivia fact: It wasn't until  1920 that a yellow light was added to traffic signals as a warning for drivers to slow down.
Labels: councilwoman gerrie schipske downtown area early long beach streets