How Zaferia Sobered Up and Became East Long Beach

The story goes like this. When the Pacific Electric Railway was laying its tracks for its Newport Branch Line in 1904 through Long Beach down to Huntington Beach (the city named after the PE's founder), they cut across through an area they named "Zaferia" -- little village. The little town prospered because it as "wet" -- had saloons and the adjoining city of Long Beach was adamantly "dry."
The area was bordered by Loma and Temple Aves. on the east and west, State St. on the north and ll th St. on the south. A conglomeration of shops, lumber yards, a blacksmith shop, a theater and a post office provided services. The Pacific Electric Railway built a line connecting Zaferia to downtown Long Beach via Redondo Avenue and Broadway.

In 1907, a builder named Jay Burgin began constructing numerous city structures and homes. By 1920, Long Beach moved to annex Zaferia and succeeded. The area was renamed East Long Beach. In true fashion of a "big city" -- the renaming was celebrated by the residents of Zaferia being told to "clean up" and plant either palm trees or camphor (eucalyptus) themselves. 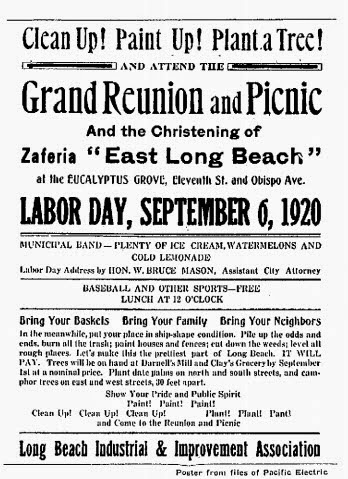