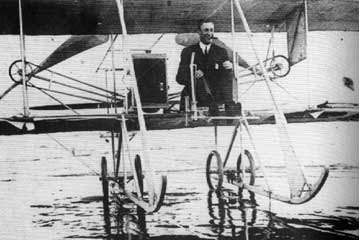 On December 10, 1911, Cal Rodgers completed the first transcontinental flight from Sheepshead Bay, New York to Long Beach, California, when he landed in water just near the Pine Avenue pier. Rodgers attempted to completed the flight in 30 days in order to receive a $50,000 prize from William Randolph Hearst but failed because of numerous crashes.

Landing in Pasadena, he was approached by the Long Beach Chamber of Commerce and was offered $5,000 to finish his flight in Long Beach.  Rodgers took off from Pasadena but crashed in Compton, seriously injuring himself. His plane was taken to the Sun Parlor at the end of Pine Avenue Pier and repaired.

After a brief recuperation, Rodgers flew to Long Beach and was escorted over the water by Earl Daugherty, Frank Champion and Beryl Williams, other Long Beach aviators. He landed near Seaside and Linden Avenues.

The next month, Rodgers led the Rose Parade in Pasadena in the same Wright plane he had flown across the U.S. and dropped carnations and roses on the crowds 100 feet below.

It took many years before historians officially recognized that Rodgers finished his historic flight in Long Beach. Today, the Smithsonian National Air and Space Museum in Washington, D.C., acknowledges where the flight finished.

Rodgers, who knew many of the Long Beach aviators, ran a flying business here after making history. Unfortunately, on April 3, 1912, just 100 yards from the Pine Avenue Pier, he crashed his aeroplane and broke his neck. 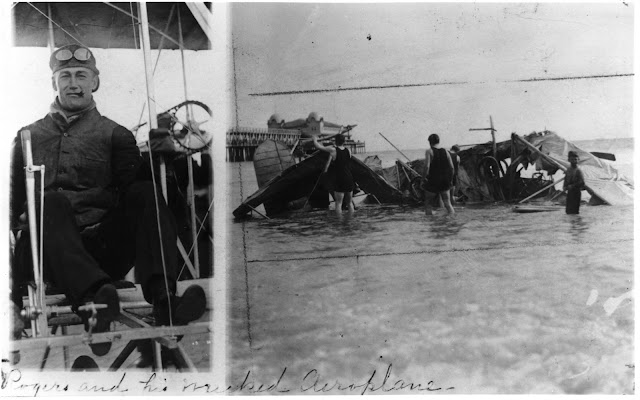