Thanks to Congressman Alan Lowenthal and others who co-sponsored House Resolution 162, today has been designated as "National Rosie the Riveter Day."

"Rosie the Riveter" is the affectionate and collective name given to the thousands of women who worked on the home front during WWII. The name came from the 1940's popular song by the Four Vagabonds: "Rosie the Riveter."

In Long Beach, more than 25,000 women worked in the Douglas Aircraft Plant assembling the planes that helped win the war.


In 2006, the City of Long Beach dedicated the Long Beach Rosie the Riveter Park. It is a 3.2 acre park (at Conant Street and Clark Avenue) that is just steps away from where tens of thousands of women worked at Douglas Aircraft Company during WWII, assembling and the planes and bombers that helped our brave men win the war. It is also located near what was the Long Beach Airfield (now the Long Beach Municipal Airport) during WWII where the Women Airforce Service Pilots (WASP), commanded by 24 year old Barbara Erickson (London), flew the aircraft to military bases. 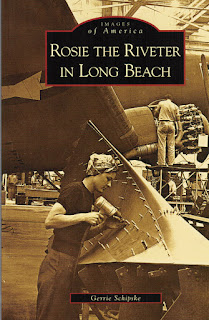 The park design was inspired by my book "Rosie the Riveter in Long Beach," and designed by public artist, Terry Braunstein. It features a rose colored walk-way that winds through the park so that visitors can see signage with photographs describing the work and efforts of these women. Visitors can access a narrated tour via cell phone and hear the song by the Four Vagabonds -- "Rosie the Riveter."

At both ends of the park are a "compass rose" that have been etched and painted into concrete, marking the location of the park.

At the north end of the park are both a military memorial and wall with plaques commemorating the lives of those who have served our country in so many ways and outlined with a rose garden in the shape of a "V" for victory.  The Long Beach Rosie the Riveter Park displays one of only two bas reliefs sculpted by Raymond Kaskey, who designed the same for the National World War II monument, here in Washington, D.C.

Last year, C-SPAN2 in its "Cities Tour," (https://www.c-span.org/video/?407602-1/rose-riveter-long-beach) featured the Long Beach Rosie the Riveter Park because of its role in honoring the women who contributed on the home front during WWII.
Labels: congressman alan lowenthal gerrie schipske long beach rosie the riveter park rosie the riveter women's history month