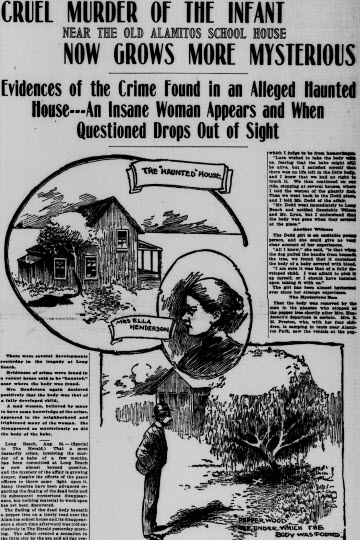 That’s the Way It Was: Creepy Tale from 1900 Long Beach

It was a dark, summer night in August when Mrs. Ella Hendersen, reported to the Marshal J.C. Baker and Constable Harry Wilson, that she had come upon the body of a dead baby adjacent to the old haunted Bailey house located near the old Alamitos school house. Simultaneously it was reported that a “mad woman” appeared and frightened some of the good women in the “city by the sea.” She disappeared mysteriously as did the body of the baby.

The investigation had the town in a stir. Neighbors near the old haunted house reported “strange” noises in the still of the night. The Marshal and Constable followed “clew after clew” but to no avail, they could not find the body. They did find “traces of wagon tracks that led from the pepper tree on the property to the haunted house.” Near the front door of the house they found “a large of absorbent cotton soaked with blood.” They surmised the body could have been wrapped inside. The house had been broken into. A window pane smashed and the lock turned from the inside. The dust on the stairs leading to a bedroom had footprints. Inside the bedroom, was a bedstead with blood stains. Blood was on the floor nearby.

Because the window was smashed the investigators thought there might have been more than one person in the room and that a scuffle might have occurred. Mrs. Hendersen’s account of finding a body began to fall apart as her story changed. She told some friends she found the body of the baby at 9 o’clock but then told others she reported it a 1 o’clock. She was driving her buggy on the property looking for eggs and grapes from the vines growing all around.

As a witness to her discovery, she claimed that her 17 year old cousin, Lura Dodd, (no relation to City Auditor Laura Doud), had accompanied her on her buggy ride. “We were driving along the road leading from Alamitos park, when near Bishop Street our little bull terrier pulled a bundle from underneath the pepper trees that grow along the roadside. In doing so he pulled the bundle apart and we were horrified to see the body of a little child, evidently that of a babe of about 8 months. We all alighted from the buggy and examined the body of a perfectly developed child.  The cotton and linen in which it was wrapped was saturated with blood.”

A Mrs. Preston (some women did not have first names then) stepped forward and added her story that she had seen a man with a dark horse driving a phaeton (a kind of buggy) stopping at the “same peppertree at which the body was found.”

The officers also found some newspapers in which the body could have been wrapped with strange scribbling in pencil with a discernable “Mrs. M” written in the side margin. Unfortunately, the officers forgot to take the newspapers with them and they disappeared.

M. Dodd, reported that an “aged woman, alleged to be demented” slept in the field near the Dodd home. “She was dressed scantily, had no hat and her long, white hair was unkempt. She talked incoherently and frightened several women in the area before she took her departure.”

Constable Wilson made an effort to locate the Insane woman, but she had disappeared as completely as had the mysterious man, the newspaper and dead body of the baby.