The Back Story About How the LB Airport Preserved Historic Mosaics


In 2009, while writing my second book on Long Beach history, I came across the fact that buried underneath the carpet at the LB Airport were a series of floor mosaics that were designed as part of the Southern California Art Project of the Works Project Administration (WPA) under the supervision of Grace Clements (1905-1969). She was designated "official supervisor of decorations of the Administration buildings at Daughterty Field." 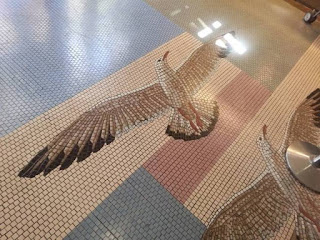 Some of the mosaics were visible on the staircase and the restaurant but the remainder had been covered over by carpet. Unfortunately, the wall murals that accompanied the floor designs were painted over in 2005 and could not be recovered.

When Long Beach hired a new Director of the Long Beach Airport, I met with him and shared what I had discovered and encouraged him to have the carpet removed to see if the mosaics could be recovered.Just this month the restoration project was completed and mosaics are available for viewing. 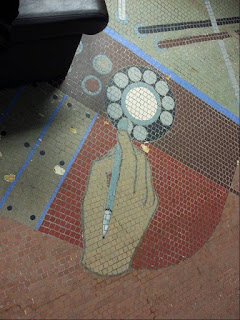 Mario Rodriguez was very enthusiastic and when improvements were planned for the terminal, he included the removal of the carpet to see if the mosaics could be saved. And they have been.

The mosaics cover the 4,300 square foot first floor of the airport when installed by Clements and her workers. A 1942 article in the California Arts and Architecture magazine describes how Clements focused upon the theme of communication: "A large map of the western hemisphere showing air routes occupies the central portion of the concourse floor. Large geometric areas of unbroken color form the main body of the floor, highlighted by design units evolved from the idea of communication -- ships, oil, aviation and the telephone. 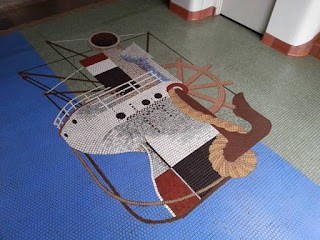 Clements also painted four murals on the first floor level dealing with a "particular means of communications -- by land, by water, by air and by sound."

If you look on the second floor, murals included sky and constellations of the northern hemisphere. A zodiac mosaic is outside the entrances of the restaurant. The colors in the murals were specifically designed to mute the strong light coming in from the windows in the dining room. The mosaic city seal at the main entrance and seagulls at the back were prominent. Carpeting covered the three mosaics on the first floor, depicting oil, shipping, and aviation.