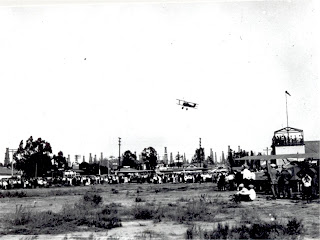 Amelia Earhart persuaded her father to bring her to Long Beach to see the Winter Air Show at Earl Daugherty's airfield. She was so thrilled with the stunts performed by Daugherty and his pilot friends, that she begged for a ride in an airplane.

Long Beach Poly High School graduate Frank Hawks took her up the next day and she was hooked on flying.

Earhart took a couple of lessons from Nita Snook but got into a spat with Snook who gave up flying and turned Earhart over to her friend, John Monty Montijo.

Montijo, a friend of Earl Daugherty (the two met in the Air Corps during WWI), taught Earhart how to do aerobatics and to solo. After she completed her training, she joined the Long Beach Air Circus, headed by Daugherty, and flew in several shows.

Even after her flight over the Atlantic, she kept in touch with Montijo -- I know because I read the letter she sent him about her flight that was in a closet in the LB Airport. She also visited Long Beach frequently and stayed at the Breakers...as did Charles Lindbergh.