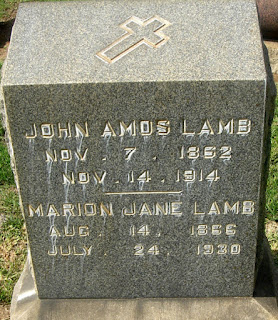 John Amos Lamb was a local banker who was arrested with 29 other men in 1914 by the Long Beach Police and charged with being a "social vagrant" which was code word for homosexual.

Lamb was a "vestryman with St. Luke's Episcopal Church" and the Vice President of the Long Beach Savings Bank. He took his own life near Point Fermin by swallowing cyanide.

Both he and his sister Marion are buried in Angelus Rosedale Cemetery.
Labels: 1914 gerrie schipske historic cemeteries homosexuals james lamb