How Naples Got Its Name

That's the way it was: The promise of a pier at Belmont Heights and how Naples got its name 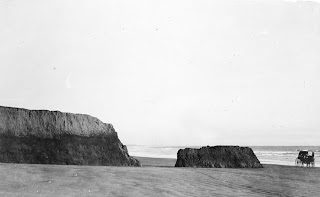 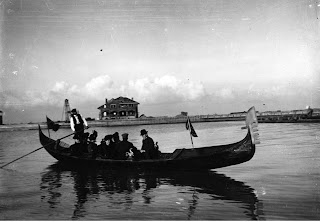 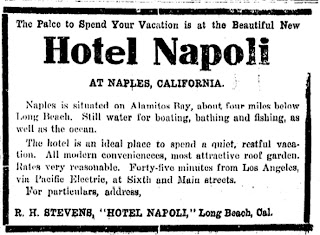 Pier
Long Beach had its eye on the Belmont Heights area for several years and attempted several times to encourage residents to incorporate with the city.

Finally in 1909, Belmont Heights was annexed to Long Beach and residents were promised they would get a park in return.  However, some of the residents argued for a pier. A bond election in 1910 approved $50,000 for a 1,000 foot pier made of concrete.

A resident took the issue to court and the court held that the election for the bond was illegal because it lacked the two-thirds vote of the residents needed for approval. The city tried in 1913 and 1914 to pass the pier bond.

Finally, in 1915, the pier opened at the foot of Thirty-Ninth Place near Devil's Gate, which was the name of a large rock off the bluff area that at high tide made the beach impassible.
The completed pier was 975 feet long and 112 feet wide. The City added a comfort station on the pier in 1916.

Naples
In 1905, Arthur Parson and his son developed a tract of Bixby Slough marshland at the mouth of the San Gabriel River. They envisioned duplicating an in-land bay and residential area along canals that were similar to those in Italy, complete with high arching bridges and "gay gondoliers."

The dredging to fill the island and the installation of concrete bulkhead to push back the water were done at considerable expense. All the homes built were to be white and to have red tile roofs. The landfill would raise the homes to a level high about tides. Building restrictions were put in place to prevent low-income housing.

A contest was held to name the area, and the name Naples was selected. Alamitos Bay and Naples were eventually connected to Long Beach and Newport Beach via electric trolleys because of H.E. Huntington.

Huntington was president of the Naples Company and with Parson envisioned the same type of development that was completed by Parson in Venice, California. To make Naples more attractive to investors, a duck club was built on the San Gabriel River near Anaheim Road.

The areas featured residences and summer homes. Motorboats and gondolas steered by local gondoliers added to the efforts to make the area  replica of Italy.

The Naples Hotel or Hotel Napoli, was developed by Alma Hershey, a distant member of the Hershey chocolate empire. The Hotel did not open until 1929 and closed within two years because of the Depression.

The 1933 earthquake damaged many of the bulkheads, bridges and sea walls in Naples, which were repaired with federal and local funds.
Labels: beachcomber gerrie schipske naples that's the way it was